The Claudio Santoro Auditorium is the main stage of the largest Latin American classical music event.

In addition to being an architectural masterpiece and a privileged cultural space, it also has 814 seats and an enviable backstage infrastructure, with cargo lift, 2 production rooms, 3 individual dressing rooms and 2 collective dressing rooms, lodgings and administrative area.

In the Auditorium, you have the opportunity to enjoy a performance surrounded by beautiful landscapes.

Gian Carlo Gasperini, an Italian who lived in Brazil, was the architect behind this great project, along with his associates Plínio Croce and Roberto Aflalo. They also had collaboration from Orfeu Zamboni and Igor Srenevzky for the wonderful acoustic project.

The Auditorium is shaped as an amphitheater, using the natural unevenness of the terrain for the audience, covered in square slabs, in exposed concrete and supported by four pillars with glass lateral closings, allowing a contact with the external environment and integration and contemplation of the exuberant nature of the place.

The stage and service facilities are adjacent to the audience, whose upper part has the foyer, forming an esplanade with the cover.

Historical connection to the Winter Festival

The Claudio Santoro Auditorium is an integral part of the Winter Festival history, which began in 1970 in the Boa Vista Palace (winter residence of the governor of the state of São Paulo, inaugurated in 1964) Noble Hall, with a piano recital by Magdalena Tagliaferro in its first edition.

In a short time the Festival grew and it was necessary to define a new venue to host the concerts and, thus, the land near the Palace was chosen.

Although the main objective of the creation of the Auditorium was to receive concerts and performances, due to its erudite tradition following the Campos do Jordão International Winter Festival, ACAM Portinari understands the space as a fundamental vehicle for integration with the city of Campos do Jordão and the entire region of the Paraíba Valley, considering expanding the artistic activities programming it offers.

Because of this, the Social Organization proposes a public policy for the Auditorium, in consonance with the Department of Culture of the State of São Paulo, to strengthen its public character, attracting and training new visitors, to transform it into a place where the citizens of Campos do Jordão and other visitors can take advantage of a diversified cultural program.

Beginning the construction work in 1975, the Campos do Jordão Auditorium, as it was called then, was inaugurated in 1979, and in 1989 its name was changed to Claudio Santoro Auditorium, in honor of the maestro who died that same year, the first conductor of the Brasília Symphony Orchestra, internationally acclaimed as a great composer of contemporary classical music, with an important musical collection of about five hundred works.

Always the responsibility of the São Paulo State Department of Culture, with the new management model for cultural equipment and programs at the state level adopted by the São Paulo government, the Auditorium began to be managed in partnership with Cultural Social Organizations.

Integrated for management purposes, the Felícia Leirner Museum and the Claudio Santoro Auditorium are currently under the responsibility of ACAM Portinari – Association for Support of Casa de Portinari Museum, located in Brodowski, in the state of São Paulo.

The current proposal foresees a more intensive use of space, with the elaboration and implementation of an Annual Calendar that will contain, in addition to the traditional Winter Festival, in July, events that allow the space to act in a creative and democratic way, including partnerships with curators, city administrations, universities and related institutions, in addition to establishing a dialogue with musicians, artists and cultural producers.

The main goal is for the Auditorium and the Museum to play a leading role, strengthening exchanges with diverse cultural groups and with the local population and other visitors. 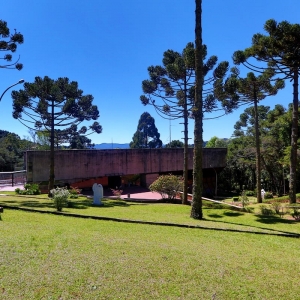 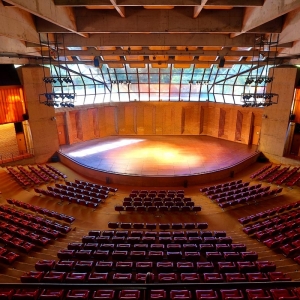 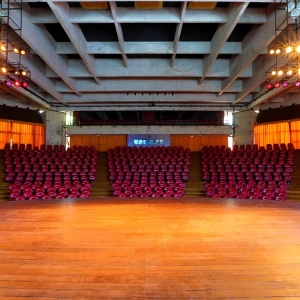 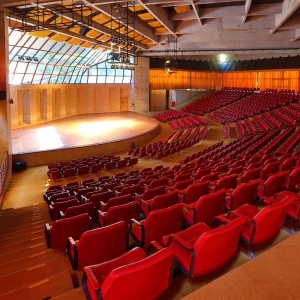 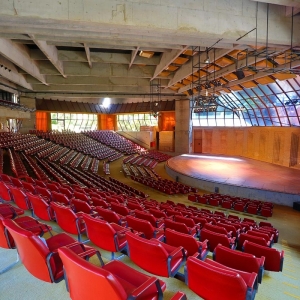 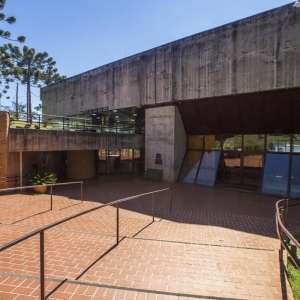 Claudio Franco de Sá Santoro was born in Manaus (AM) in 1919 and was one of the most restless and versatile musicians of his time. A prodigy, an inspirational creator and brilliant interpreter, a dynamic organizer, a playful pedagogue and an indefatigable researcher, he has developed a national and international activity as composer, conductor, teacher, organizer, administrator, jurist, Brazilian representative at conferences and international organizations. governments and foreign institutions.

Santoro received numerous awards and honors, both national and international, among them the Honoris Causa Doctorate, awarded by the University of Brasília in 2005. He was founder and Master Conductor of the Radio MEC and University of Brasilia Chamber Orchestra, Radio Clube do Brasil and National Theater of Brasilia Symphonic Orchestras; Full Professor, Coordinator for Musical Affairs, Director and Organizer of the University of Brasília Music Department; President of the Order of Brazilian Musicians (Brasilia Section); Musical Director of the Federal District Cultural Foundation; Inter-American Music Council (OAS) Member of the Directing Council; Organizer and Director of the Center for Broadcasting and Information for Latin American Music at the Institute for Comparative Studies of Music and Documentation (West Berlin); Member of the Brazilian Academy of Music, the Brazilian Academy of Arts and the Academy of Music and Letters of Brazil, of which he was President. Between 1970 and 1978 he was, by competition, Professor of Regency and Composition, Director of the Orchestra and Department of Orchestra Musicians of the Heidelberg State School of Music Mannheim, West Germany. He was guest conductor of the most important symphonic orchestras in Brazil and in the world.

Claudio Santoro died in March 1989, in Brasília, during the rehearsal of the 1st season concert, which was to honor the Bicentennial of the French Revolution. His performance in artistic, educational and political levels, was remarkable and influenced several generations. It gave life to numerous organizations of musical or pedagogical character.

Source and more information can be found at: www.claudiosantoro.art.br